Product Hunt is a website that lets users share and discover new products, from apps, websites and technology products that everyone’s talking about. On September 22, 2015, Matt Mullenweg, founder of WordPress, Automattic, JetPack, and Audrey Capital hosted a LIVE Chat on Product Hunt.

There’s a large list of participants (or community members) who ask Matt questions about almost everything; from what are his favorite apps on his phone, to questions about Plugins, themes, and new upcoming releases. One conversation between community member Nikhil VIMal and Matt that caught my interest is below in the screen shot provided:

Not all questions got answered, but Matt did a fantastic job answering as many as he could.

Real pleasure to chat with Matt, the most successful humble person I know.

“Emoji” is a Japanese term meaning “picture character.” It’s a standard for showing smileys and other little symbols inside text. But unlike traditional smileys that are made up of a sequence of letters like :), every emoji has its own letter.
Marcus Kazmierczak

According to Sarah Gooding’s post, Twitter has “open sourced Twemoji,” meaning the emoji characters/symbols we all know and love to use on our phones are now accessible on twitter and can be seen all alike on mobile devices and desktops.

In even more interesting news, Twitter also partnered up with Automattic to help WordPress do the same. Sarah also briefly explains how it may be easy to use emoji’s on a mobile device, but could prove slightly more challenging to desktop users. So to help she shared a small cheat sheet to use emoji on desktop.  She also says, “Mac users type Command + Control + Space while in a text editor. Windows… users can make use of the touch keyboard, which includes emoji support” (Sarah Gooding).

This is a great step for emoji users and it eraser a very annoying problem that’s been around for quite some time.

In May 19th 2015 it was announced that Automattic would acquire WooCommerce . The article states that with most people have their sites built on open source software like WordPress. So when Automattic (what powers WordPress and a lot of Plugins) acquired WooCommererce it made it easier for people with businesses to sell their products. END_OF_DOCUMENT_TOKEN_TO_BE_REPLACED

According to WP Tavern, in April 2014 Longreads became the next company, along with WordPress.com, to be part of the Automattic family. Longreads recommends and helps people to discover the best long form stories, defined as “over 1500 words”. Longreads stories will be displayed in the WordPress Reader.

Mark Armstrong, the founder of Longreads, says this in his announcement of the acquisition:

“We see a huge opportunity to go deeper with our mission, both through Longreads and WordPress.com—to find undiscovered talent, to celebrate the work of writers and publishers you already love, and bring even more of the best storytelling onto the Internet.”

Longform content is believed to be on the upswing to be reinvented, with the recent rise in use of mobile devices and apps dedicated to reading.

WordPress News summary for this week

It used to be that you could only submit a new theme for WordPress.com if they had invited you to. That all changed at the beginning of 2014 when WordPress.com announced that they would add a submission form to their site for anyone who would like to sell their themes.

There have been mixed feelings about how well that has gone. Theme sellers are excited to have the opportunity to submit their themes freely, but at the same time, allowing so many people to submit themes is slowing down the approval time for the themes. That can cause some frustration among sellers.  Theme creator, Mike McAlister said on his own review of how WordPress.com submissions were going:

I’m not talking about weeks long, I’m talking about months long. Each Array theme review has taken at least a month, usually longer. Our latest theme for WP.com, Camera, took 4 months from the day I submitted it to the day it was released.

Right now, this is what the theme submission page at WordPress.com says.

When contacted about why it took down the theme submission option, Automattic said:

While theme creators may be upset by the take down of the open theme submission form on WordPress.com, it should be helpful for them to realize that WordPress is working on getting the system updated so it won’t take so long for their themes to be approved. Automattic did not give a date on when their form will be available again.
Hat tip: WP Tavern

According to Venture Beat, Automattic purchased Scroll Kit, a visual online editor for storytelling. According to Scoll Kit, “Our objective was to create a process for making the web that was more like drawing on a piece of paper.”

Scroll Kit is a drag and drop, multimedia content app that allows creation of visual stories online in a scrolling format. Scroll Kit arranges elements in layers so that objects can be placed on top of other objects

An example of how Scroll Kit works can be seen from Contently.com on a feature story called “Brooklyn Took It” and the New York Times Snow Fall.

Information and tutorials on how to use Scroll Kit may be found from Mariam Posner and in the Pharrell interview on Complex. 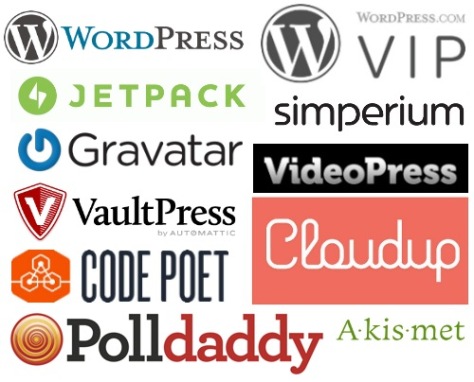 Who owns WordPress and controls the copyright and profit?

Simply put, WordPress states in its license that WordPress is licensed under the GNU General Public License (GPL), and that it is that it is owned by the contributors. This means anyone, including companies, third-party programmers or foundations that provide funding own WordPress. As a result, the single copyright of WordPress is held by thousands of individuals, all represented by the WordPress Foundation, the trust established to further the mission of the open source project called WordPress. END_OF_DOCUMENT_TOKEN_TO_BE_REPLACED

In an effort to protect and maintain the free-access to WordPress open source code, The WordPress Foundation, a 501(c)(3) public charitable organization was organized in 2010 by Matt Mullenweg.

The WordPress Foundation clearly states that:

“People and businesses may come and go, so it is important to ensure that the source code for these projects will survive beyond the current contributor base, that we may create a stable platform for web publishing for generations to come.”

One of their first donations from Automattic was the gift of the WordPress trademark. This generous donation was made to entrust the Foundation with the protection and continuation of WordPress. Their intent was to safeguard the trademark by making it independent of any company. The WordPress Foundation has developed policies for fair use of their trademark. END_OF_DOCUMENT_TOKEN_TO_BE_REPLACED

Jetpack is a single plugin that gives you the most powerful WordPress.com features, hooking your self-hosted WordPress site to WordPress.com’s infrastructure to take advantage of robust stats, easy social sharing, customization, traffic, mobile, content, and performance tools. These powerful features were previously only available to WordPress.com users.

The Jetpack team is made up of employees of Automattic, the makers of WordPress.com. Years ago WordPress.com blogs had easy access to a lot of features that really weren’t available to self-hosted WordPress sites unless you wanted to install and maintain many individual plugins. After enough interest from self-hosted sites to have access to the same features with only a click of the mouse, the great developers of Automattic created Jetpack. Self-hosted WordPress users can install over two dozen popular plugins with only one click. And of course it’s that easy to update them as well.

END_OF_DOCUMENT_TOKEN_TO_BE_REPLACED

In the article “WordPress just bought Scroll Kit, a visual online editor for stories,” written by Kia Kokalitcheva, she starts by talking about the different companies that have busted into the website making game. Kokalitcheva compares a few of the companies like Squarespace, Weebly and Brandcast and the amount of funding that they get. Plus gives insight to Automattic raising $100 million in funding. END_OF_DOCUMENT_TOKEN_TO_BE_REPLACED

According to WPTavern, Automattic has acquired “Code for the People,” a UK-based WordPress development agency and longtime WordPress.com VIP partner. This acquisition expands the reach of WordPress into the European market even further.

WordPress is a free and open source content management system, as well as being owned by company named Automattic. Automattic was founded by Matt Mullenweg in 2005. Automattic is derived from the founder’s first name. Automattic employees work from around the world meeting once or twice a year or more as needed, becoming one of the first virtual companies in the world with hundreds of employees.  END_OF_DOCUMENT_TOKEN_TO_BE_REPLACED

WordPress.com is a free web hosting service available by Automattic. This tutorial is designed to help you sign up for your first WordPress.com Website from start to finish. END_OF_DOCUMENT_TOKEN_TO_BE_REPLACED

Working at home is the American dream, right? You could attend a meeting in your pajamas right from the comfort of your own living room, or wake up and not commute to work, and sit in traffic for a thousand hours. If you landed a job with Automattic, you could make the American dream a reality for yourself.

In the article “Working With Us,” on Automattic’s website, it tells you how it is to work in the life style that is Automattic. The site shares that everyone works from their home or offices, and have employees all over the world. Because of such a wide a ray of employees and times zones, Automattic is active twenty-four seven.

END_OF_DOCUMENT_TOKEN_TO_BE_REPLACED

Welcome to the class site for the WordPress classes at Clark College in Vancouver, Washington. All content is created by the students and instructors writing about WordPress, offering WordPress tips, techniques, and helpful information as part of their class assignments. Student discussions are held on ClarkWP Talk. Please see our About, Contributors, and Policies for more information.

Welcome to the class site for the WordPress classes at Clark College in Vancouver, Washington. All content is created by the students and instructors writing about WordPress, offering WordPress tips, techniques, and helpful information as part of their class assignments. Student discussions are held on ClarkWP Talk. Please see our About, Contributors, and Policies for more information.

From the Current Student Sites